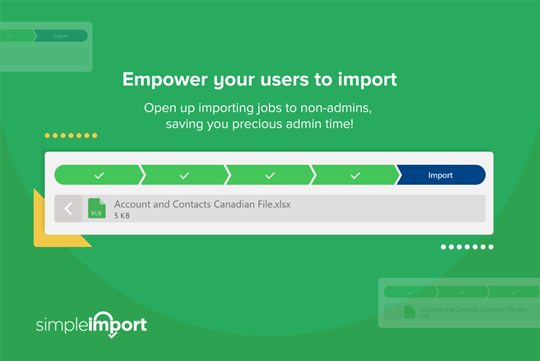 It feels like groundhog day. Every once in a while, there’s an excel sheet that has to be imported to Salesforce on a regular basis by a user. It happens to all of us developers. We have written the same or slightly different code over and over again. We used to have 2 options at this point.

Well, if your only tool is a hammer, then all your problems are nails. And nails, there are plenty.

Plenty of issues with dataloader

Dataloader really isn’t fit for use by regular business users, especially if they are not tech savy or admins. It’s also hard to use, it seems like ergonomics are an afterthought in this piece of software. As developers, we often had to support users on such “simple” tasks as excel imports. There were plenty of issues.

It started with users not being able to login with dataloader due to IP restrictions, two factor authentication and other security features that might be enabled in enterprise organizations. Users not understanding datatypes and having a hard time with complex field mappings. Users not understanding error messages. Users not being able to install the Java virtual machine as they lack admin privileges on their own machines, which is standard in corporate environments. I don’t blame them, they are not software engineers after all. Let’s just say, the amount of time we had to support dataloader is for sure measured in weeks. The amount of time put into confluence pages for dataloader tutorials is something I’d rather not think about.

Custom Code is not always economical

On the other hand, there’s the custom import component. We have basically written the same or slightly different code numerous times for multiple clients. Sometimes we’d use SheetJS to upload the data via Apex, sometimes we’d upload the files directly to Salesforce and have them processed by Talend. We have made good money with that. But, you know, if the user story hadn’t been the excel import, we would just have made money on a different thing that actually delivers real business value instead of doing a custom implementation for a fairly standard task and costing the customer unecessary money, both in development and maintenance cost.

There are standard solutions, And I found a good one

To this day, I cannot tell you why we never bothered looking for standard solutions to the common request of excel imports in the past. Probably because we were blinded by the availability of dataloader or custom business rules of the customers.

But this year at London’s Calling, I saw a very impressive demo of ProvenWork’s SimpleImport that really made me wonder on why we put up with dataloader for so many years. The speed and ease at which Salefsorce data got imported really left a lasting impression.

I had to try it. And I will say, I like the tool very much. Much better than dataloader. Not only can you import your data comfortably with drag and drop in Salesforce, it’s also very easy to place their import component directly into pages. It literally took me less than 5 minutes, to set up an excel import for Contacts and put that onto the account flexipage.

Apart from the component, there’s also a standalone app which can be used to import excel files. It features a wizard that guides you through all steps and is very easy to use. No more login problems with dataloader! No more required Java Virtual Machines!

Even better, unlike dataloader you don’t need to work with CSV. You can use XLS and XLSX and there’s a sheet selector if you’re importing straight from a workbook.

A real killer feature is the rollback. In case you mess up, you can easily rollback the import to the previous state.

But the best thing about it: For the most common and mundane tasks, there’s a free version available. It doesn’t cost you a penny to import the most common Salesforce standard objects.

From now on, we won’t be using or suggesting dataloader anymore. It’s much easier for us, the users and the customer to just use SimpleImport. It’s basically a win-win-win situation.

You know, at helpful bits we used to say:

“Keep IT simple, as simple as possible, but not simpler”

– Loosely based on the words of Albert Einstein

For SimpleImport, the name says it all.

And I still scratch my head on why we didn’t look for premade standard solutions earlier. That’s why most people buy Salesforce, after all. If you want to get in contact with the fine folks at ProvenWorks or you’re interested in SimpleImport, just contact us or visit their website.

send us an email!